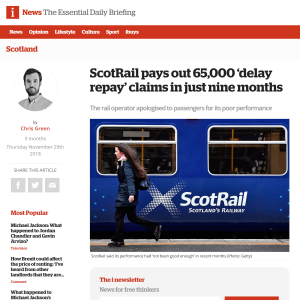 “ScotRail has apologised to customers for its poor performance after internal figures showed it paid out more than 65,000 compensation claims for late running trains in the space of just nine months. The rail operator processed 65,060 successful “delay repay” claims between January and September this year, or 232 per day, figures obtained from the Scottish Government showed.”